MS Dhoni has showed a knack for the dramatic in how he goes about his game, and the reason for this is probably that he has led a life which can give fair competition to the raciest of thrillers. For example, when Dhoni and three of his friends were taking a road trip from Ranchi to Agartala in a race against the clock for him to reach in time for his first Duleep Trophy match in 2001, a huge step for the promising 20-year old, any weaker heart might have wilted when the car engine gave its first sputter.
The reason for this unorthodox way of making one’s way into domestic cricket limelight, as opposed to the more conventional route with the rest of the team by air, can be pinned down to the bureaucratic disorganisation of cricket in the country. As is said in Dhoni’s hometown, "If one Indian crab tries to climb out of the jar, nine others will pull it down."
An 18-year-old Dhoni had made his first class debut for Bihar in the 1999-2000 season, and played his coming-of-age knock the next season, in January 2001 against Bengal. The 19-year-old played an innings beyond his years, protecting his tail-enders admirably on way to a maiden FC century, 114 not out, helping his side earn a respectable draw from a position where it had looked like an innings defeat was imminent.


A shock call-up made useless by CAB’s incompetence

He was included in the East Zone side in the 2001 Duleep Trophy, a shock call-up considering his lack of experience. But his matchwinning ability had been evident from his earliest cricketing days, and selectors saw a potential investment. This was also a big opportunity, because most India cricketers would be featuring in that edition of the tournament, in preparation for the 2001 tour by Australia.
However, the shambolic state that Cricket Association of Bihar was in meant that they had no way of knowing or had no intention to convey this news to Dhoni. News did not reach Ranchi of this call-up in any way, till it was too late to join the rest of the team in Kolkata, who were taking a flight to Agartala.
It was Dhoni’s friend Paramjit Singh, a.k.a Chhotu Bhaiyya, who got the news first, and with 20 hours left before the match would start, collected money and hired a Tata Sumo and drove it towards their destination. Among the two other friends in that car was Gautam Gupta, Dhoni’s future brother-in-law.
The car broke down on the highway, however, and Deep Dasgupta was played as East Zone wicket keeper against South Zone.
Conspiracy theories have said that the Bengal-dominated East Zone could not afford to drop Dasgupta at that stage – he had already played Tests, and an important international series was coming up.
Might it have been that it was this that stopped the news from reaching Dhoni in time? Considering the dearth of Indian wicketkeepers at that time, might Dhoni have come up with something in that match to be called up to the India team for the Australia series?


What happened after the Agartala match

Dhoni was not able to reach his team in time for the first match, but travelled with the team to Pune for the second match against West Zone. He was 12th man in that match, but had at least one dream fulfilled. Sachin Tendulkar, who scored a match-winning 199 not out for West Zone, asked for some water from Dhoni during a drinks break.
He had to turn his mind to practical matters after this match, however, and was signed up to work for South Eastern Railways as a ticket examiner, by worth of what he added to their cricket side. He was known to be irregular at work, and was once served a notice by his employers.
Dhoni had to wait before he would get an opportunity at such a big stage again, before three years of steady progress earned him a spot in the India A side that played in Kenya. He was named Man of the Series and the nation was suddenly aware of the prospect of a long-haired wicketkeeper who could play for the country soon, someone who could run very fast between the wickets and who could hit the ball out of stadiums.
National selector Pranab Roy put his weight behind the Bihar (later Jharkhand) youngster, having spotted something special during his days of umpiring at the junior level while Dhoni was coming up through the ranks. Within a year of that tri-series in Kenya, Dhoni had earned an India cap.
It is funny when luck is ascribed to some of Dhoni’s victories, because luck has not always been his best friend.

Yet we call India a communal country

Both temple (mandir) & mosque (masjid) co-exist side-by-side in a town of Pune, India with utmost harmony & peace between the followers of both Hindu & Muslim faiths. Yet our general perception is that India is the most communal country of the world, or at least some consider it to be so.

Does Islam profess to not respect one's motherland?

Recently, Hyderabad Islamic seminary Jamia Nizamia issued a 'fatwa' that Muslims should not chant 'Bharat mata ki jai' slogan. Their reasoning is that the birth land cannot be compared to mother. Only humans give birth to humans, not land. Hence, this kind of slogan is forbidden according to Islam. They further added that even though Muslims love their country, but they cannot chant such slogans to express their patriotism.

Now my question is what is superior to a human being? Is his religious identity or country of birth? If religious identity prevails over country of birth, then such 'fatwa' gets clean pass. But if country of birth should overhaul religious identity, then are these 'fatwa' legitimate? Most country's constitutions protect the rights of its citizens to practice their religious beliefs, or at least in the modern-day's democratic societies. But when one of the largest religion of the world tells its followers that country of birth is less prioritized than religious identity, then what message does it give to others about that religion? Does it not show that the followers of that religion would prefer to die for their religion than their country of birth? In the time of need, would those followers of that religion be willing to shed bloods to save their country from foreign invasion? Would they care if others try to buy their country, buy its people, buy its valuables, buy its richness? Would they feel any sympathy when invaders destroy national emblems, national symbols, national statues etc.? Would they jump in to save those from demolition at the time of necessity? What does that show to a neutral or atheist who does not believe in any God(s), that what (land) has sustained one (people) for so long has no value when it comes to saving its (land) honor?
Posted by Unknown at 1:14:00 AM No comments:

Who were these veiled individuals in JNU's protests? 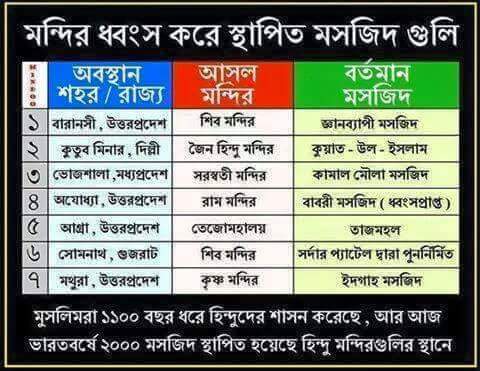 Is this a fair justice system?

We usually talk about justice system being blindfolded & it does not matter who the culprit is, the accused when proven guilty will get the punishment. Does that happen all the time in our society? Do normal people get treated the same way as a celebrity, professional, businessman, politician?

Not to critique on the verdict given by the court in India recently, but it was quite obvious that if you come from a wealthy, big-name, famous family, Bollywood or something, then you won't get the punishment you deserve. Be it a Khan or Kapoor! Even though the liberal-minded Indians still believe Muslims in India are not treated well in a Hindu-majority country, Salman Khan's recent verdict on the famous 2002 hit-and-run case set him free by the 'fair' legal system.

Who gets the punishment then? That individual who was met with sudden death. That family who lost a loved one in the family. That wife who lost her husband when she needed him most to maintain the family with kids. Can we really accept this as 'fair'?

Whether you like it or not, it is true that the Indian media has created the 'intolerance' issue to be something bigger than what it actually is. Current Maharashtra Chief Minister Devendra Fadnavis said it perfectly during a media interaction recently.

In the last few weeks, the talk of the town in Indian media has been 'intolerance' in India from the majority-Hindus against minority-Muslims. Big name celebrities have become involved in this debate. The main talking point was when Aamir Khan told the media during an interaction that his wife (Kiran Rao) asked him at one point whether or not they should move out of India for the betterment of their son over 'intolerance'.

Janab Aamir Khan,
I am an ordinary Indian citizen and an avid movie-goer. You are a superstar in a country where the majority of movie-goers are Hindu. For years, we have spent our money to buy tickets for your movies. It is our money that has made you what you are today.
We clapped when as ACP Ajay Rathore, you destroyed a sweet-talking Gulfam Khan in 'Sarfarosh'. We cheered when as Bhuvan, you played the winning shot in 'Lagaan'. We cried when as a sensitive art teacher, you made us root for Ishaan Awasthi in 'Taarey Zamin Par'.

A couple of generations before you, an Yusouf Khan had to become a Dilip Kumar to be accepted and a Mahajabeen Bano had to reinvent herself as Meena Kumari. Not you though. Neither you, nor your contemporaries had to hide your identity to be successful.
You became a star in a new India. An India, where only your first name mattered. We loved you because you were Aamir, a brilliant actor. Neither your last name mattered to us, nor your faith.
But yesterday, you proved to us that for you and your wife at least , it is your last name that matters more than anything else.
Your name is Khan and you Sir, are a hypocrite.
You did not scream intolerance when your city burned at the hands of some of your co-religionists. Your wife did not feel insecure when a mammoth crowd of some of your co-religionists attended the funeral of a hanged terrorist. You were silent even when a mob from Reza Academy kicked and destroyed a national memorial and manhandled female cops.
But now, suddenly, your wife feels insecure in India and wants you to move out.
If I WERE indeed intolerant, I would suggest you move to the Kingdom of Saudi Arabia, the safest place on earth, where Begum Kiran Rao can feel absolutely secure inside her abaya and your little son can grow up watching public executions in a Riyadh square.
But I am not going to do that. As a tolerant Indian, the only thing I can and WILL do is to make sure that not even one rupee of my hard-earned money goes towards buying tickets for your movies. Thanks for the disappointments.
Regards,


This is one of the largest ancient rock-cut temple of Indian civilization of Hindu belief. The structural architecture of this grand temple can teach us a lot about Hindu history of the past, their modern understanding of building complex structures & the need to preserve such priceless piece of history with all that we have today.

Who would you choose?

Exposing Gandhi: The Naked Saint and his Spiritual Terrorism of Non-Violence

"If our civilization is to survive, we must break with the habit of deference to great men. Great men make great mistakes."
—- Sir Karl Raimund Popper (1902 to 1994)


Some of us must have seen Richard Attenborough’s film on the life of Gandhi which was first screened in 1982. Though many critics say that the film was unfair to Muhammad Ali Jinnah and Subhas Chandra Bose; but taken as a whole, the film was a faithful portrait of Gandhi.

Be Proud To Be An Indian!